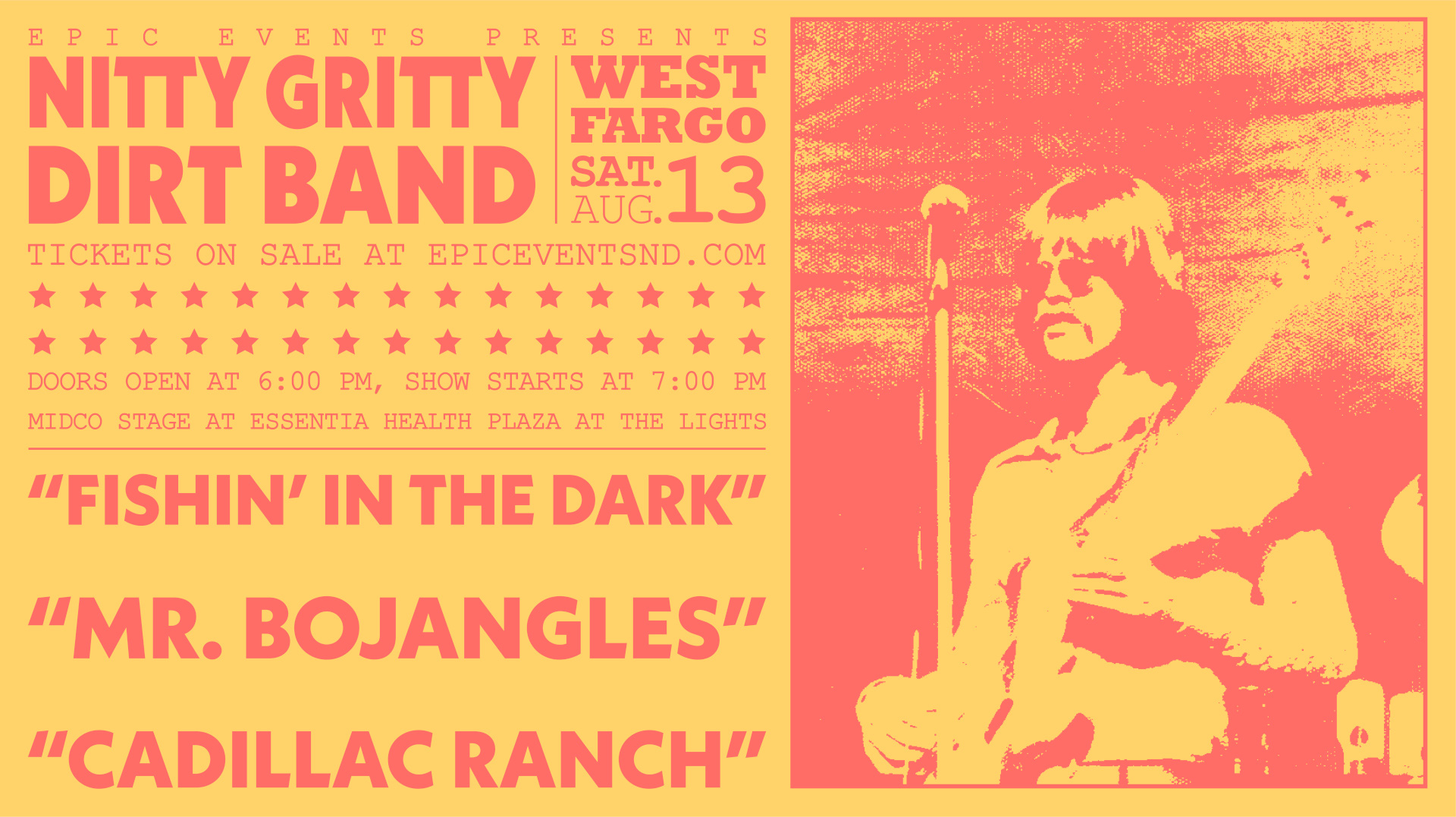 ‍Country Legends to play the Midco Stage at Essentia Health Plaza at The Lights with Special Guest Allie Colleen.

EPIC Events is excited to announce their first summer concert of 2022 - Country Legends Nitty Gritty Dirt Band live on the MIDCO Stage at Essentia Health Plaza at The Lights on Saturday, August 13th at 7 p.m.

All six members also sing, and when their voices merge, the harmonies add a powerful new component for the legendary band. And with the father-son pairing of Jeff and Jaime Hanna, the band carries on a country music tradition of blood harmony.  Jeff Hanna says, “It’s like when you throw a couple of puppies into a pen with a bunch of old dogs. All of a sudden, the old dogs start playing, you know? That’s kind of what’s happened with us. The basic vibe is so up and positive, and the music–we’re hearing surprises from Jaime and Ross all night. And they’re encouraging us in the same way to take more chances. It’s opened a lot of doors for us, musically, and the morale is really great. That’s important for a band that’s been out there for over 53 years.”

The Nitty Gritty Dirt Band played their first gig in 1966 in Southern California as a jug band, and by 1969 had become a cornerstone of the burgeoning country-rock community. Their career breakthrough came in 1970 with the release of the record Uncle Charlie & His Dog Teddy and the single “Mr. Bojangles,” a folksy Top 10 pop hit that remains a staple of their live show. During a tour stop in Nashville around that time, Earl Scruggs and his family came backstage to say hello. That introduction led to a friendship and some of the connections the band needed to record Will the Circle Be Unbroken. That three-disc album brought Nitty Gritty Dirt Band together with a number of country, folk, and bluegrass legends. Heroes like Roy Acuff, Mother Maybelle Carter, Jimmy Martin, Merle Travis, and Doc Watson joined the scruffy, young band to record country music standards such as “I Saw the Light” and “Keep on the Sunnyside.” The acclaimed project is considered a landmark recording in American music.  Nitty Gritty Dirt Band earned a pop resurgence in 1980 with “An American Dream” and “Make a Little Magic.” Those singles also found traction on the country chart, setting the stage for a major run at country radio.

The band secured 16 Top 10 country hits between 1983 and 1990, including three No. 1 singles: “Long Hard Road (The Sharecropper’s Dream),” “Modern Day Romance,” and “Fishin’ in the Dark.” Bernie Leadon, a founding member of The Eagles, played in the band from 1986 to 1988 filling a vacancy by longtime member John McEuen.

With so much material to work with, the band is making it a point to shuffle the set lists more often, meaning that this isn’t the same Dirt Band show from years past. “We’re fortunate that we’ve got a deep songbook. That’s been on our list, to resurrect some of the tunes we haven’t done in a while, in addition to some new stuff,” Hanna says. At the peak of their country career, the band toured Europe with Johnny Cash and June Carter Cash, who hinted that they’d love to appear on a sequel to Will the Circle Be Unbroken, if the band ever decided to make one. That gesture convinced the band to get back in the studio to record another all-star album. Circle Volume II featured Johnny and June, as well as Rosanne Cash, Emmylou Harris, Levon Helm, John Hiatt, Bruce Hornsby, John Denver, Ricky Skaggs, New Grass Revival, and many other marquee names –not to mention encore performances by Roy Acuff, Jimmy Martin, and Earl Scruggs. Released in 1989, the album won three Grammys and a CMA Award for Album of the Year.

As the country music landscape shifted toward a youth market, the Nitty Gritty Dirt Band kept on touring and recording. They played on two projects by The Chieftains, cut a song with Karla Bonoff for an album dedicated to the 1996 Olympics, and contributed “Maybe Baby” to a Buddy Holly tribute, “Not Fade Away”. Another collaborative album Will the Circle Be Unbroken, Volume III, arrived in 2003. Soon after, the band earned an additional Grammy for “Earl’s Breakdown,” which they recorded with Earl Scruggs, Randy Scruggs, Vassar Clements and Jerry Douglas. Meanwhile, both “Mr. Bojangles” and “Will the Circle Be Unbroken” were inducted into the Grammy Hall of Fame. The Nitty Gritty Dirt Band took a moment to acknowledge their incredible history by filming a 50th anniversary concert event at the Ryman Auditorium in Nashville. Guests for that Circlin’ Back special included early Dirt Band member Jackson Browne, Sam Bush, Rodney Crowell, Vince Gill, Alison Krauss, John Prine, Jerry Douglas, Byron House, Jerry Jeff Walker, and longtime Dirt Band member Jimmy Ibbotson. The concert aired as a nation-wide PBS Pledge special in 2016 and won a regional Emmy for Special Event Coverage.

Today, the Nitty Gritty Dirt Band consists of Jeff Hanna, Jimmie Fadden, Bob Carpenter, for years known as “the new guy,” and Jim Photoglo, a friend of the band whose credits include co-writing “Fishin’ in the Dark”, as well as touring and recording with Carole King, Dan Fogelberg, and Vince Gill. Newest members Jaime Hanna and Ross Holmes also bring years of experience to the band. Hanna toured and recorded with The Mavericks and Gary Allan, while Holmes toured and recorded with Mumford & Sons and Bruce Hornsby. “The energy these days is so up --and our fans have responded in a really great way,” Hanna says. “As a fan of other bands, I know how complicated it can be when members come and go. You can either embrace that or you don’t. Our fans are really gracious and I appreciate that. It’s been a really good run and there’s a lot of daylight ahead of us.”

A Belmont University graduate from Owasso, Oklahoma with a style that is truly her own,

Allie Colleen is no stranger to the music industry. A passion for singing and songwriting since a young age has garnered her a reputation of being a notable songwriter with an iconic-sounding voice.

Her impeccably strong voice with hints of timeless tradition accents her Americana Voice. The room never falls to silence as Allie Colleen begins to sing about the layers of love and heartbreak that have shaped her. Some of her newest songs bring witty lyrics and a connection to the song unlike most today.

One of her original songs, “Close Enough”, gained more than 750k views on YouTube. Her social media following has continued to increase every year. Her passionate drive and innovative vision set her apart from her peers resulting in her music and videos going viral on the internet – even capturing the attention of well-known radio show host Bobby Bones – proving that her audience is captive and waiting for her next song. Persistently working to hone her skills along-side industry professionals and performing at venues both around Nashville and national venues, Allie Colleen garners a growing fan base.

Allie Colleen’s debut single, “Work In Progress” defines the life that’s shaped her with personal lyrics and transparency in both the vocals and delivery. “Work in Progress” is a sweet sentiment regarding her introduction to the Music Industry co-written with hit songwriter Marcus Hummon and well-known studio producer Greg Bieck. Also, look for her current single “Along the Way” on all digital platforms.

EPIC Events is an independent, entertainment promoter located in West Fargo, ND.  Our goal is to bring live events (concerts, comedians, speakers and more!) to the city of West Fargo and the surrounding region.  We are also committed to the arts and will strive to bring opportunity to artists to display their work publicly throughout numerous partnerships we have in the area.